To our clients and friends all over the world
Wishing you a sweet and happy, peaceful new year filled with new beginnings, happy endings, good health and abundant blessings.

Wishing all our clients and visitors a

Rosh Hashanah, the holiday that marks the beginning of the Jewish year, is in the Hebrew month of Tishrei, which coincides with late September and early October. This year Rosh Hashana begins on the evening of 9th September 2018.

Unlike the other holidays, which have one holy day on which businesses are closed, Rosh Hashanah is a two-day holiday, and businesses are closed on both days. The holiday is two days according to tradition started in the Diaspora when the onset of the new moon – which traditionally was decreed by the High Court in Jerusalem – was not known.

According to Jewish tradition, Rosh Hashanah commemorates the culmination of the creation of the universe and acceptance of God’s sovereignty over the world. These are also the days on which God judges people’s deeds throughout the year and decides their future for the coming year – death for the sinners, life for the pious and a repentance period until Yom Kippur for people whose status is uncertain.

The period between Rosh Hashanah and Yom Kippur is called “The Ten Days of Repentance,” during which people have the opportunity to atone for their sins.

Selichot (special penitential prayers) – During the week (or month, depending on the ethnic group) prior to Rosh Hashanah there are special “Selichot” prayers, requesting forgiveness and expressing remorse and repentance.
The blowing of the shofar (ram’s horn) – On Rosh Hashanah, 100 (or 101, depending on the ethnic tradition) shofar blasts are sounded in the synagogue, in single, triple and nine-blast groupings.
The shofar blasts are intended to symbolize God’s sovereignty over the world, to remind Jews of the giving of the commandments on Mt. Sinai, of Abraham and Isaac’s devotion to God, to arouse people to repentance and to herald the Day of Judgment and the coming of the Messiah. When the first day of Rosh Hashanah is on Shabbat, the shofar is sounded only on the second day.
Apple and honey – At the evening meal on Rosh Hashanah it is customary to eat an apple dipped in honey and other sweet foods to symbolize a sweet new year.
Tashlich – On Rosh Hashanah afternoon it is customary to walk to a river, lakeshore or other open body of water, to shake out one’s pockets and symbolically cast one’s sins into the water. If you come to Israel during this period, it is worth going to see religious Jews performing this custom. When the first day of Rosh Hashanah is on Shabbat, Tashlich is performed on the second day.
New year greetings – Until a few years ago Jews in Israel (and around the world) used to send “Shana Tova” greeting cards to their friends and relatives wishing them health, happiness and prosperity for the new year. Today this custom has all but disappeared, as most Israelis prefer to use the telephone or e-mail. One way or the other, it is customary for Jews to wish everyone they meet during this New Year period a “Shana Tova” – a good new year.
Holiday meal – Even secular Jews who do not go to synagogue services usually have a holiday meal on the Rosh Hashanah evening, with fine wine, apple dipped in honey and other sweet dishes. It is customary to eat pomegranate, as a symbol of a plentiful year, the head of a fish, symbolizing the desire to keep ahead, and other symbolic foods.

Like on Shabbat and other Holidays, kosher bars and restaurants are closed and there is no public transportation.

To our clients and friends all over the world.

From Yonete and the IPC Team

To our clients and friends all over the world,
Shana Tova and Gmar Hatima Tova.
Wishing you a sweet and happy peaceful new year filled with new beginnings, happy endings, good health and abundant blessings.
From the Israel Property Care and IPC Vacation Rentals Team. 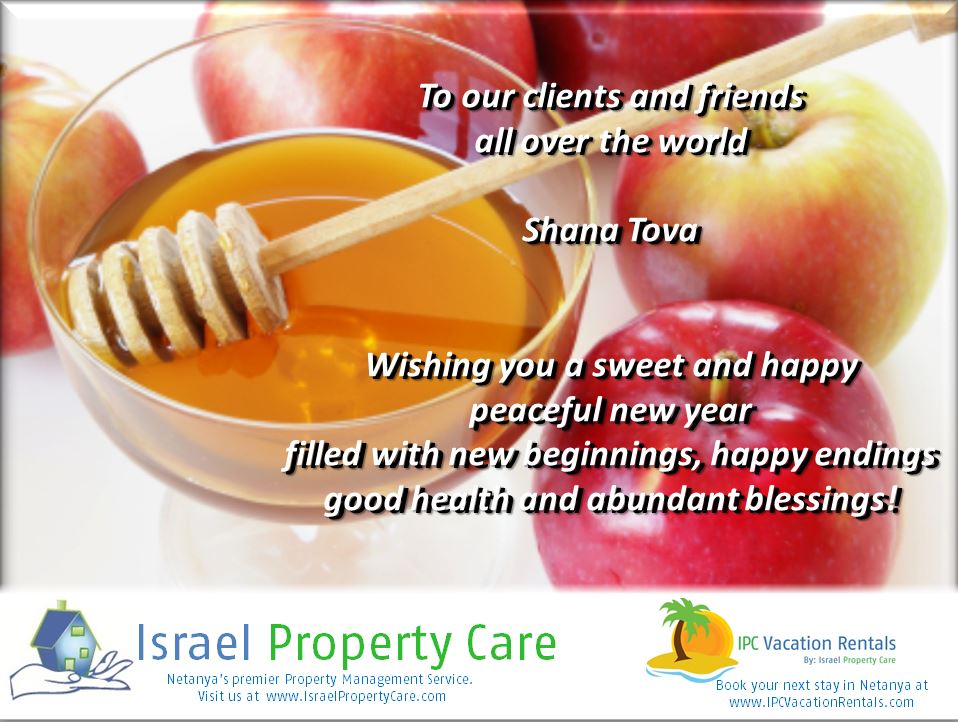