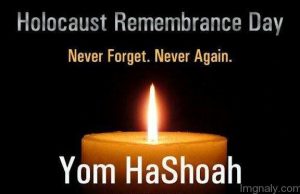 Yom HaShoah (Yom HaShoa, Yom HaZikaron laShoah ve-laGvura) officially translates to “Remembrance Day for the Holocaust and Heroism”, but is often known as “Holocaust Remembrance Day” in English. It is an occasion to commemorate the lives and heroism of the six million Jewish people who died in the Holocaust between 1933 and 1945. Yom HaShoah is on the 27th day of Nisan, the first month of the ecclesiastical year in the Jewish calendar.

Yom HaShoah opens in Israel at sundown in a state ceremony held in Warsaw Ghetto Square at Yad Vashem, the Holocaust Martyrs’ and Heroes Authority, in Jerusalem. During the ceremony the national flag is lowered to half mast, the President and the Prime Minister both deliver speeches, Holocaust survivors light six torches symbolizing the approximately six million Jews who perished in the Holocaust and the Chief Rabbis recite prayers.

On Yom HaShoah, ceremonies and services are held at schools, military bases and by other public and community organizations – but this year, when all the formal Holocaust ceremonies are canceled, Zikaron BaSalon offers a unique and authentic way to keep the tradition and the memory alive.

“This year, our most important commitment is to protect the safety of the Holocaust survivors, as they are the most vulnerable, thus, Zikaron BaSalon is going to proceed without live testimonials from our survivors. Additionally, we are working to ensure that we keep Zikaron BaSalon running and following all the restrictions necessary, which means that we’re going to host Zikaron BaSalon digitally.”

On the eve of Yom HaShoah and the day itself, places of public entertainment are closed by law. Israeli television airs Holocaust documentaries and Holocaust-related talk shows, and low-key songs are played on the radio. Flags on public buildings are flown at half mast. At 10:00 am, an air raid siren sounds throughout the country and Israelis are expected to observe two minutes of solemn reflection. Almost everyone stops what they are doing, including motorists who stop their cars in the middle of the road, standing beside their vehicles in silence as the siren is sounded.