Yom Hazikaron is Israel’s Official Memorial Day for her fallen soldiers and victims of terrorism. Yom Hazikaron is an especially solemn time and marked by ceremonies and silences across the country. 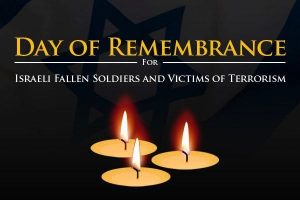 It starts at sundown on April 27 2020 and is marked until sundown April 2020 and is followed immediately by Yom HaAtzmaut, Israeli Independence Day.

Yom Hazikaron begins at sundown (8.00pm) when a siren is sounded across the country for one minute. Everybody stops what they are doing, including cars driving on the highway, and observes the silence to show their respect and remember the fallen. That evening, the official State Ceremony to mark the start of Yom Hazikaron takes place at the Western Wall (the Kotel) in Jerusalem. Unlike in many other countries, Israel’s wars have taken place at home and being a small country, almost everybody knows somebody who died in the country’s wars making Yom Hazikaron an incredibly personal time of remembrance.

The following day, a siren sounds for two minutes, at 11.00 am, again the country stops to remember. Following this, memorial ceremonies take place across the country – either public or private, to remember the country’s fallen. That evening, between 7 and 8.00 pm, another state ceremony takes place, this one at Mount Herzl, Israel’s National Military Ceremony. This ceremony marks the end of Yom Hazikaron, and the beginning of Yom Haaztmaut, Israel’s Independence Day, a day which contrasts dramatically to what preceded it and a strong reminder of the price Israel has paid, and continues to pay for her independence.

Usually there are many ceremonies you can join for Yom Hazikaron, at the Western Wall there is an annual ceremony for the Memorial Day opening where the the flag is lowered to half-mast, this year due to Covid-19 there are no public ceremonies, we are remembering our fallen from home.